Lately we’ve been working on producing a second run of Noah Falck’s Snowmen Losing Weight. We’re nearing the end of this process, which we started back in early October. A limited number of copies will be available on December 7 (pre-order here). Till then, we wanted to give everyone a look inside the creation of Snowmen.

When we choose a manuscript for publication, it’s usually in a pretty solid state and in need of little editing. Our job, as we see it, is to figure out how the manuscript should be presented, to find its ideal form and make it happen. Since we make all of our books by hand, we have the freedom to do a lot of experimentation and really explore ideas in form and design. So we do.

Snowmen Losing Weight looks pretty simple from the front, but is actually one of our most complex designs to date. It’s a modification of the dos-a-dos binding style, in which two books share the same cover. But instead two, Snowmen has four.

Snowmen is a collection 61 poems, and it came to us already arranged in sections. We liked this idea and wanted to take it a little further, so a couple of intrepid staff members took the manuscript, consulted Noah and did some reordering, ultimately grouping them into four distinct but equally weighted sections. We decided early on that we wanted to design a book that supported this structure in a direct way – we played around with several different concepts (that included everything from slipcases to sweatbands) but ultimately settled on a single book with four spines. 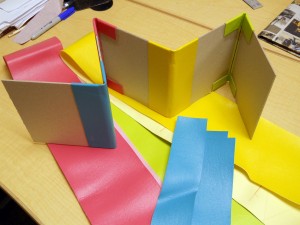 A cover in progress

From there we moved on to material selection. We wanted to use a fabric for the spines that would hold up to a lot of use and give the book more strength and structure than standard issue bookcloth. We settled on a colorful marine vinyl, traditionally used for outdoor upholstery. We selected shades that reminded us of the 1980s and early 1990s, tapping into a sense of nostalgia which we also felt was an undercurrent of the work itself. 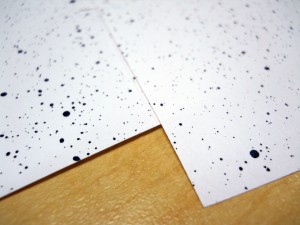 When it came to cover design, we wanted something simple that would work with the already complicated and bright structure. At the time we were using ink to do a color wash for the covers of another of our 2012 titles, Far Out All My Life. This lent us the idea of using ink for Snowmen as well, and students developed a technique for specking black ink on white, suggesting snowfall. We wanted to repeat the same idea on our endpages, but to give the design some depth, we used white on black. All covers and endpages were flecked by hand, so each book has a slightly different pattern.

Sewn signatures not yet glued in

Snowmen is labor-intensive, but we can’t imagine it any other way.