In any business it’s important to take risks and try new things. A successful business keeps it fresh with new projects, but that doesn’t mean all of those projects are necessarily successful. On BatCat, we like to have a sense of humor when this kind of thing happens, which lead to several inside jokes and downright laughable items in our storage. Recently, after Handmade Arcade, we took inventory and found a handful of these old projects, so we decided it’d be fun to give a little tour of BatCat’s projects and products that just didn’t have what it takes.

Not one project, but several unfinished and unloved little half-books. The Orphan 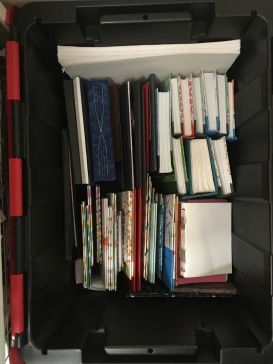 box has been around as long as BatCat has been making books and then forgetting to finish them, so pretty much from the start. The orphan box sits in our storage room with the label waiting for someone, anyone, with a little bit of spare time to stop by and show an old project some love. From book covers with no paper inside, to measured and half glued boxes, you could say the box kind of serves as a manifestation of time management problems. You start a book when you have publications to read and vote on, products to pack for events, publications to put together and more! Yet you still think you have time to squeeze making a book in there? Sometimes the projects are just too big to take on, or someone hasn’t yet mastered the skills required to complete it. All of this leads to our poor little Orphan box, a source of some guilt throughout BatCat, but good to have around in case anybody ever does get some free time.

In 2017, BatCat wanted to branch out. We wanted fresh ideas, something we’d never tried before. Eventually, Sierra, a sophomore on BatCat, had an idea for a pin company that would serve as an extension of BatCat Press. This pin company would send out a monthly pack of our pins, with different, surprise designs and themes that’d we’d choose and design. Each month they’d receive this pack of pins in the mail. This idea was fun and weird, we’d never tried any kind of subscription before, so we gave it a shot. Sierra called it Nuclear Pins because the school BatCat is based out of, Lincoln Park Performing Arts Charter School, is just down the street from a nuclear power plant. Students like to joke about radiation and the dangers of the power plant, so the first pin set was Nuclear Power Plant-themed. We tried to sell subscriptions at the 2017 Handmade Arcade, but, alas, sales were unsuccessful and we ended up losing interest and abandoning the project. But not before making a mass of nuclear power plant themed pins that we now have buried in other inventory on one of our bookshelves. 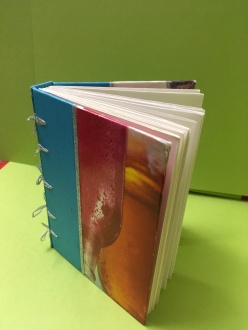 The Soda Bottle Book, also known as “Ugly Boy” or just “That One” has been in our inventory for so many years that none of us, even our managing editor and teacher Mrs. Baringer, had any idea who made it. This book is the culmination of several bad design choices, with its hot pink end pages, sparkly silver ribbon binding, and pink and purple pop bottles that were cut out from some art magazine; it’s a nightmare with pages. We’ve taken this book to every event as far back as we can remember and it has never sold. It’s price gets adjusted as often as gas prices, one day it goes down and the next day it’s back up, and no one is really sure why. It’s become infamous on BatCat, every new member looks at the book and makes a face that says, “Are we sure we want to put this on the table?”

This year at Handmade Arcade, we had the pleasure of being visited by an alum who revealed that they were the bookbinder responsible for The Soda Bottle Book. The legacy lives on though, and some staff members secretly hope the book never sells so it can always stain our sales table with it’s fizzy, loud colors and the story that lives beyond it’s blank pages.

BatCat Press has seen failures, successes and everything in between over the past decade or so. Luckily for us, we’re able to have a sense of humor about them and not let them distract us from the next project we decide to take on!