BatCat Press has been participating in events from craft shows to writing conferences all over the country for years, and we’ve made a lot of friends along the way. There’s always something to learn or someone to meet at events, both big and small. Stay tuned for our shoutout series where we’ll be highlighting some of the most unique, interesting, and special people we’ve met throughout the years!

One of the events BatCat has participated in for years is Handmade Arcade. Whenever we think of Handmade, we think of one of our favorite makers, a little soap company that made their way into the big time with their funky and unique products. Hip Modern Soap has been participating in Handmade Arcade for years, they were even approached last year by the HA curators to be one of the event sponsors. However, the road has been long for Hip Modern Soap, they went from getting declined over and over, to becoming one of the most anticipated makers, not only at HA, but at events across the region.

Hip Modern Soap was started by Carrie Robertson and John Elliff and is run out of a studio in the Pittsburgh area. Their story is one of hard work, trial and error, and resilience. “We didn’t get in to Handmade Arcade on our first try, as we were just a couple noobs on the scene with a rag-tag product and no real presence on the crafting radar,” Carrie says about when they were first starting out. Handmade Arcade, the “superbowl” of craft shows, was a priority for Hip Modern. They saw crafters they knew being a part of this event and knew it was something they wanted to be a part of as well. “That’s where we wanted to see ourselves,” Carrie says, “sitting at the Big Kid’s Table, shoulder to shoulder with Etna Print Circus, Artifact Metalworks, Everyday Balloons, Commonwealth Press and the like.”

Even though they’ve been doing this a while now, the folks at Hip Modern still haven’t lost sight of what it’s all about. “We’ve come quite a way, but we still feel like there are more hills we can climb…we’re always brainstorming new products to roll out, different packaging options, even displays make a difference.” They start their preparation for HA, which is in December, as early as September. Carrie says they start by getting together things they know will sell well, this includes soap, bath bombs, and body scrubs that they’re well known for now. The soap making process alone takes up to three weeks, and then there’s still packaging and labeling to work on. When the prep for their well-known products is done, they get to experiment! They try out new molds, concepts, and mixtures until they find the perfect product. 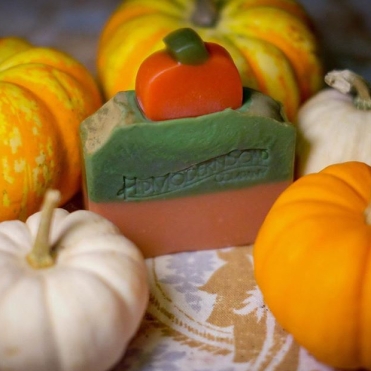 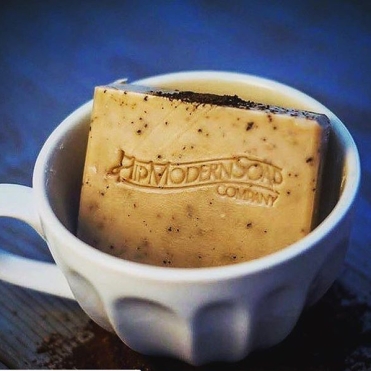 BatCat press has been attending HA for eight years now, and our experience is stamped with a certain soap company that will always make the event special for us. At our first Handmade Arcade, when we were still in the early years of the press, our students were so excited to be a part of the event. Everyone took some time to roam the floor of the event, checking out all of the booths, and one they kept coming back to was Hip Modern Soap. Their products were fun, well-made, free of animal products and full of personality. We’ve made a habit of swarming their table ever since. Carrie, John, and their friends at the Hip Modern Soap table have certainly returned the love as well. When a bunch of high schoolers kept coming up to the table to buy soap, they decided to make their way over to our table to see what we were all about. They didn’t leave empty handed, and they still haven’t, every year since.

Last year they even had some tote bags with their logo printed up specifically for the BatCat crew (print job credit: Ink Division, some other cool cats on the craft circuit, go buy their stuff).  “The BatCat squad pretty much invade our booth at HA, and they come in waves, and we love it.” This time, Carrie says, they wanted to be ready for it. “If you have a stable customer base, you reward that to keep them around,” Since they were older when they first started out, they love to see young people “grinding it out” on the craft scene.

This years Handmade Arcade is on December 8th at the David L. Lawrence Convention center in Pittsburgh and will feature over 180 crafters, artists, and makers, including, of course, Hip Modern Soap and BatCat Press! Both the staff of BatCat and HMS know the importance of supporting local artists at events like this, which is why Handmade Arcade is one of our biggest events of the year. As the largest craft show in Pittsburgh, every year there are hundreds of new and returning people to see. You can support Hip Modern Soap, BatCat Press, and plenty of other awesome organizations at Handmade Arcade from 11am-7pm, or swing by at 10am for the early bird admission. We can’t wait to see you there!

Where else can you find Hip Modern Soap? Right the heck here!: