A few weekends ago, BatCat once again attended The Association of Writers & Writing Programs annual conference, this year in Washington D.C.! Two years ago in Minneapolis marked the first time BatCat students were able to attend the conference, with two in attendance. The next year, two were able to go once again, that time to LA.

This year, due to the (relatively) close proximity of D.C. and Pittsburgh, the press was super excited to be able to bring more students than ever, all first-timers!

Olivia, who joined BatCat halfway through last year, right before the LA conference, was particularly excited. “The moment I found out that AWP was going to be Washington D.C., I knew that I had to go,” she wrote. “I’d been looking forward to it since last year, and I have to say that I was far from disappointed.”

A snowstorm that hit Philadelphia on her way over, which left 9 inches of snow in its wake, delayed her arrival to around 2 PM on Thursday, but because she’d worked a few events in the past, she had no issue jumping right in.

Alexa joined BatCat at the Walter E. Washington Convention Center about two hours later. “I got lost on the way walking from my hotel to the convention center,” she said, noting that she got lost about five times within the three days that she was in D.C. “But besides being a terrible navigator, I was pretty much in my element. The city itself was beautiful and exciting, and being there, not as a tourist or traveler, but as a representative for BatCat Press, was a great feeling.” 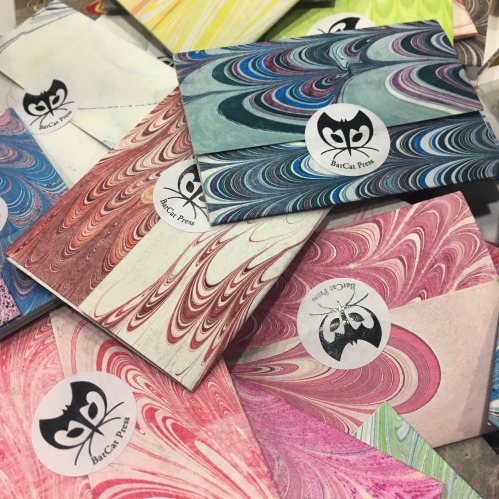 While at AWP, the staff members not only worked the table, but had the opportunity to explore other booths. “It took me two days to get through all the tables on just the left side of the room,” Alexa said. “I couldn’t stop to talking to people and asking about their presses, sometimes telling them about ours.”

The students also got the chance to meet authors, including ones we’ve published. Olivia said, “This was my third time seeing Kevin Haworth (Far Out All My Life) after meeting him [at an event] in Frostburg, Maryland, and again at a workshop at Carlow University [where he directs the MFA program]. I also had the opportunity to meet our next author, Francesco Grisanzio (Swamp Frank) who helped run a booth of his own.”

All of the staff members discovered really quickly what students at past conferences were surprised to learn, too: being a high school press really sets you apart! Alexa said that she was often met with smiles and surprise when she told visitors to the booth how old she and the other staff members were. One man even said, “High school? Are you kidding? I was doing nothing in high school. This is really something!”

Olivia had a similar experience. “Until AWP, I’d never realized how unique our press was. Just saying we were in high school was enough to convince people to check us out, or even buy a book or two. In fact, when I saw a familiar face, a Carlow University student, she purchased a copy of When You’re Down by the River after I told her it’s one of my favorite publications!”

Haley, meanwhile, was on a mission! “Since there were four students who attended this year, and our table space was quite limited, we were encouraged to take Valentines and blank journals and begin our own table at one of the empty booths. So, we packed up our cards, grabbed some sharpies, and began hunting for an open table.”

“The Valentines were one of our first real projects on the new printing press, so they’re a bit quirky and experimental, but that’s what’s great about BatCat—we try our best to do anything that we can!” 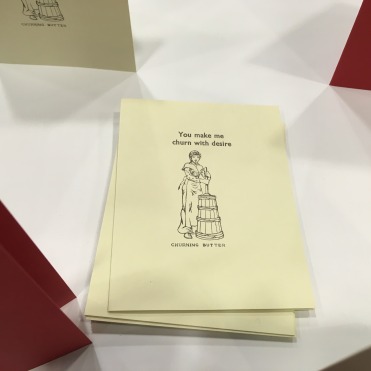 “One of my favorite parts was when a woman came up to our make-shift set-up and told us that there was ‘a buzz going around’ about our table. I was genuinely shocked by how many people came up and bought our cards, and by how fast we sold out of stock!”

“I sort of felt as though I was competing with BatCat,” Haley said, “but I never hesitated to represent the press. Of course, I spent the majority of my time at the BatCat table, but our tiny adventure is something I hope to remember.”

On the very last day, Olivia created a mission of her own. “With two hours left on Saturday and only three copies of When You’re Down by the River left, I bet Mrs. Baringer that I could sell all three!”

“I couldn’t,” Olivia admitted. “But it was a fun challenge, and, thanks to Haley, Mrs. Baringer, and years of sales experience, I was able to sell the second to last one with two minutes to spare. Considering there was only one copy to bring back home, and that we went to D.C. with an optimistically high number, I’d say that everyone won.”

By the end of the conference, the staff was feeling quite proud of the press. Alexa said, “The weekend was a blur, but an amazing time and wonderful opportunity. I’d go again in a heartbeat.”

Olivia added, “I’m not exactly sure what I was expecting when I signed up to go to AWP. I left having met some amazing people, awesome presses, and cool journals. As a writer, finding places to submit to is intimidating, but having physically met the people running them, it made submitting feel so much more real. I’m so excited to attend AWP in Tampa, Florida next year!”